Containing four tracks of dark, rumbling dronescapes, Iron Trees has been seeing a lot of play on my tapedeck. Black Velvet Stereo crafted the tunes on broken down instruments, which you'd expect would result in gritty sort of sound, but instead it's foreboding and a little sci-fi sounding. Digging this a lot, can't wait to hear more from BVS.

Dozens gets this split started with a side long, psychedelic journey into the realms of deep space. A raucous guitar and synth improv that's pretty rad. Things get wrapped up on the B with Confused Kundalini, who drop five mystical tracks of synths, field recordings, and vocal harmonies. Hard to pick a winner on this one, but I think it's Confused Kundalini by a hair. 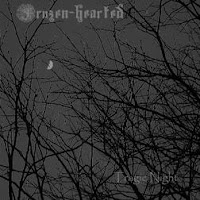 The debut ep from this one-man atmospheric doom unit, Tragic Night is worth scoping out as a soundtrack for your despair. Things start off with a bell heavy, dark ambient intro, followed by a somber doom metal dirge, and conclude with some more dark synth stuff. Let the black nothingness envelope you. 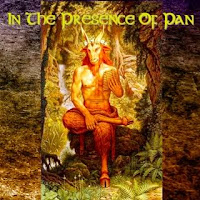 Marco Grosso – In The Presence of Pan cd-r

When In The Presence of Pan starts out, you suspect it'll just be a slab of laid back, ambient field recordings. Birds chirping, leaves rustling, the wind murmuring; it's something nice to have on in the background while you read. Wrong. Because after a while these low key instrumental drones start up, then comes the distant, ritualistic chanting, and you realize something important is taking place. If you're not focused on the music, it's all going to slip right past you. The mistake is in assuming that because In The Presence of Pan is calm and quiet, you can just zone out to it. An impressively crafted piece of ambient music that's not for everyone, but rather aimed at connoisseurs of the genre. 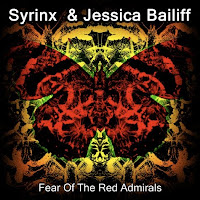 As a reviewer, it's frustrating when presented with an album like Fear Of The Red Admirals because I'm acutely aware that whatever I write down is not going to accurately convey the magnitude of the music on the album. A collaboration between mechanized drone unit Syrinx and post-rocker Jessica Bailiff, these are some of the most dynamic experimental tunes I've heard in a while. I dislike categorizing the album under such a broad, amorphous term as “experimental,” but there's so much going on that it shouldn't simply be tagged as either ambient or drone. One can't help but become submerged in the waves of sound that slowly roll over you. Fear Of The Red Admirals is a must have for your collection.

Paying homage to the original Conan the Barbarian and Basil Poledouris, the composer of the film's soundtrack, I'm digging what Uruk-hai's done here. The four songs on the album are all either covers, medleys, or reinterpretation of music from the soundtrack. The stand outs are “Barbarians,” a sick black metal piece with some folk aspects, and “Piano Suite,” a somber piano medley of several recognizable songs from the soundtrack. Niiiiiice.

Smell The Stench
Posted by Geräuschkrieg! at 10:24 AM