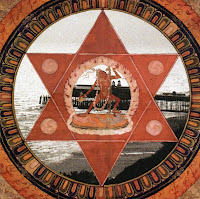 Ever since hearing the Ter ep a couple of months ago, I've been eagerly awaiting Caligine's full length to be released. Unfortunately, this anticipation only added to the utter disappointment upon finally hearing L'Autunno di Rame. The album starts out with a track that consists of two squeaky, twangy guitars improvising over the sound of the surf rolling onto the shore. And this goes of for nine minutes. This is followed by another nine minute piece with a meandering guitar and two out of synch voices reciting a poem. The album is rounded out with three tracks that clock in at under four minutes apiece; one featuring an incredibly obnoxious sawed violin, and the other two enjoyable enough, but not particularly memorable. Going back and listening to Ter, it's disheartening to see how drastically Caligine's sound has deteriorated.

It'll probably take a few listens before you can get a grasp on Thorns. Slow, spaced out psychedelic guitar stuff with a little bit of vocals, percussion, and flutes, this isn't the sort of thing for everyone. There's a hypnotic effect to much of the music on here, like if the songs were just a little bit longer, you'd have fallen into a trance. Nice...

While still firmly rooted in an electronic sound, FF&TEOZ's music is changing. There was a level of uniformity with the songs on T.Hawk, but here their style varies noticeably from track to track. Elements of chiptune, post-rock, and various others are woven into the 10 pieces. This constant genre shifting could be annoying, but they manage to pull it off rather well. Not sure if I'm 100% sold on the vocals in a few of the tracks, but that's just me. Recommended for those of you who dig unusual, laid back electronic stuff. 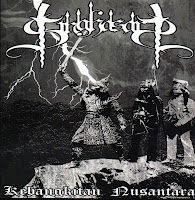 This is an impressive ep of black metal that incorporates traditional southeast Asian folk music. Yea, black metal with gamelan, it's kvlt. Not speaking Malay, the lyrics are a mystery to me, but some internet sleuthing revealed Singhasari to be concerned with standard black metal topics of nationalism, animistic paganism, and reverence for the past. Well played with a unique sound, Kebangkitan Nusantara is essential for black metal fans. Can't wait to hear more from these guys.

October's Mist Records
Posted by Geräuschkrieg! at 10:16 AM No comments: