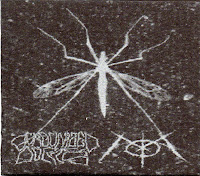 This is, easily, one of the worst releases I've had this misfortune to review. Basically, it's some sort of poorly conceived concept album where these two noisecore bands fuck around, attempting to play some punk and hardcore. This is so miserable that it's not even worth delving into everything that sucks about it. Strangely, the final track by Gorgonized Dorks is a synthed out, instrumental surf rock piece (completely out-of-character with their other half-assed punk tracks) that was mildly enjoyable. Aside from those three minutes, this release is utterly worthless. 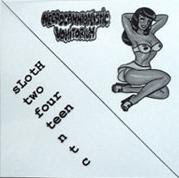 NxVx start this split out with two tracks of grove oriented rock n' roll topped off by dueling vocals of high pitched shrieks and guttural mumbling. Ok, I wasn't expecting that. It's interesting stuff, a fair bit of C.S.S.O. influence floating around. Up next is sLoth with five tracks of pointless no-wave ruckus. Somewhere in my record collection I have sLoth's splits with Noothgrush & Floor and I don't recall them sounding like this. Despite NxVx bringing it to the table, sLoth tanks the split. Plus when you factor in the outrageous cost of getting this shipped from Ukraine, it's not worth it.

Tortured Voice – A Hate To the Weak c50

Depressive, minimalistic black metal out of Mongolia, Tortured Voice is a pretty grim one man outfit. I wouldn't go as far as calling this melodic, but it's definitely for those who appreciate more atmospheric black metal. You only get three songs, plus a bonus of instrumental renditions of each track on the B side, but it'll be enough to hold you over until Tortured Voice release a full length. 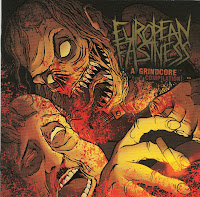 So, this has been out for a while, but I'm just now getting my hands on it. My excitement at finally receiving a copy was swiftly quelled upon hearing the first band up, Britain's Ocksen. While technically proficient, they lack passion and play a generic style of modern grind. France's Xaros is next and their sound is pretty much interchangeable with Ocksen. A Den of Robbers from Belgium follows with a slightly better sound, but it's still unimpressive. I was starting to think this would be a total loss, but then Britain's The Afternoon Gentlemen were up and let loose with some tracks of epic thrashcore. Finally, Scotland's Ablach round out the cd with some low down, brutal grind. I really wanted to like this, but 2/3rds of the music is mediocre and forgettable. Do yourself a favor and just go hunt down releases from Ablach and The Afternoon Gentlemen.

Junky Monkey
Posted by Geräuschkrieg! at 8:00 AM No comments:

The Madness of the Crowd #2

Covering the hardcore, powerviolence, and fastcore scene, The Madness of the Crowd is 14 pages of interviews, reviews and some musings on comic books. I found myself a little irked with the zine's layout; page space wasn't maximized and there were large chunks of virgin white and seemingly random photo clippings. Things could have definitely been condensed down to less pages or a smaller size, but seeing as it's a free zine, I shouldn't be bitching about it. Well worth checking out if you dig the genres it covers.

Groups that attempt to blend drone and noise generally fail miserably, resulting in what sounds like harsh noise played at ½ speed. This is not the case with this cassette. TORBA starts things off with four tracks of drone that shifts between raw and hypnotic. Dotåbåtå fills the flip side with a single track that starts out as haunting, minimalist drone and evolves into a rumbling wave of sound before fading away. Take a note, this is how you do the drone noise thing right.

Hair On My Food Tapes

Wow, this is some jangly techgrind right here. From what I can gather, vessels cast in crippled hands put out two releases, broke up, and now, half a decade later, their discog has been released. To really appreciate these guys, you've got to be more than just a casual fan of technical sounding stuff. In fact, I can see a lot of people being turned off by them. It'll be your loss. 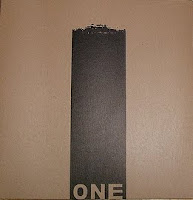 As much as I prefer vinyl format over cds, this is something that should have been released on the latter. You've got 100 powerviolence, thrashcore, grind, and noisecore bands ripping thru songs under 30 seconds and, after about the first 10 tracks on either side, you've not exactly sure what band is playing. Also, with 100 bands, there is a wide difference in track sound quality, as well as a fair amount of just plain weak groups. This is one of those 'good idea in theory' things that never manages to work out in the real world. On top of that, the label that released this has (at the time of writing this review) closed down it's website with numerous people complaining on the interwebs about having not received the orders they paid for.