As you've probably already inferred from the title, bells play a central role here on Sky Bells. However, you can't just chalk this up as a percussion album. A collaboration between three improvisational musicians, this album is a melange of bells, drums, flutes, synthesizers, and field recordings that manage to coalesce into impressive sidelong jams. The A side is a real gem, starting off in a drifting, ethereal mood that gradually builds up into a massive sonic wave that washes over you. The flip is a little less cohesive, sounding like several separate songs loosely connected together, but it's still an enjoyable piece. Totally worth scoping out if you're into improvisational stuff or vaguely psychedelic, experimental music.

Simply put, Detainee is a 16-bit electronic wrecking machine. I'd say Vital Organs could be the love child of a Sega Genesis and Kraftwerk, but that wouldn't be doing the album justice. Really rad stuff going on here with the slickest retro electronic vibe I've heard in a long while. Yea, you totally fuckin' need this.

Space age tomfoolery, that's what Mr. Dart is up to with Mint Spring Silver. These futuristic sounding, improvisational electronic jams are all about relaxing and having fun. Forget all the synth soundtracks to cosmic transcendental meditation, this is where it's at. Check it out, dudes... 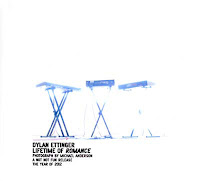 Woah, bit of a change in direction here from Ettinger's earlier Lion of Judah single and Pattern Recursion cassette. Not that this makes Lifetime of Romance bad, by any means; just that I wasn't expecting what the album had in store. Unlike earlier releases, the tracks here have a more traditional synthpop vibe going, with just a hint of dark, 80's industrial feel. But, there's still a lot of stuff that comes out of left field and catches you off guard, like the sax on the track 'Maude'. Like I said, not what I was expecting, but I'm totally digging it. 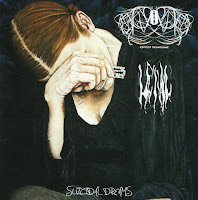 I've been a fan of Epocha Tristesse since I heard their demo a while back and was psyched to finally get some new stuff by them. With an 18 minute long track of slow dsbm, they don't disappoint. The massive track is set up with interludes of field recordings of rain and storms, which adds nicely to the feeling of melancholy. Lethal round out the cd with two tracks of fast and raw depressive black metal. I'm especially liking Lethal's vocals, which sound like a maniac's shrieking. Definitely worth checking out Suicidal Dreams if you're into black metal.

A collection of two live tracks, this is some seriously dark and menacing drone. The A side is composed of electrical pulses which surge and recede. On the B things are a little more harsh and piercing. Rad stuff.

Imminent Frequencies
Posted by Geräuschkrieg! at 2:36 PM No comments: