I'm finding myself rather unimpressed with what this collaboration has to offer. A hodgepodge of beats, samples, and static drenched synthesizers, Output Data is little more than a meandering sound collage. Occasionally something with promise manifests, but the sound quickly drifts off into mediocrity. It's not that Output Data is a terrible album, rather that there are better things you could be listening to. 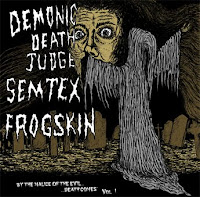 Took me a while to finally get my hands on this, but damn was the wait worth it. A split between three Finnish heavyweights, this is fuckin' rad. Demonic Death Judge kick things off with three tracks of doom laden sludge. There's just a hint of the psychedelic, stoner rock sound and the vocals have an unusual, roaring echo, which gives the songs a really distinct sound. With a more typical sludge sound are the four tracks from Semtex. You can't help but make a comparison to Bongzilla, but that's really unfair to Semtex, as their style is more blues influenced and far better sounding. Finally the album is rounded out with three tracks of dark, grimy sludge from Frogskin. There's a heavy crust influence and the vocals sound like something off a black metal album. This is easily my favorite of the three, but all of these bands are laying out some sick tunes. Get your hands on a copy of this and go load up that bong...

i AM esper – Explosion Of The Red Giant c40

I'd commented in an earlier post that it appeared i AM esper was undergoing a musical and thematic shift and Explosion Of The Red Giant confirms this transformation. Gone are the dense guitar drones dedicated to nature, replaced with cold, ambient rumblings from space. This is a very minimalistic and bleak album; not really what you'd expect from i AM esper. It's rad stuff, and showcases the talent and complexity of the project. Now for the bad news: Explosion Of The Red Giant was super limited and is sold out. Luckily, the album has been posted on i AM esper's band camp, so all you lame asses who didn't snag a copy can still check it out. 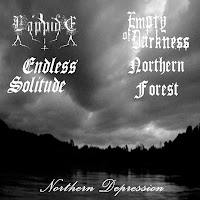 I'm kind of bummed out with this cd. The prospect of hearing some new material from Láppide had me pumped, but it turns out the track here is the one from the Meu Velho Caixão demo. And the Northern Forest piece is also recycled from the album reviewed in the last post. They're solid tracks, but I wanted some new stuff. Luckily I hadn't heard anything from Empty of Darkness or Endless Solitude, so the album wasn't a total let down. Empty of Darkness plays solid, if somewhat straightforward, black metal. Endless Solitude, a one-man side project of Empty of Darkness, let loose with a track of black metal that mixes melody and raw fury. Northern Depression is a great introduction for people who're new to these projects, but if you are familiar with them, you're going to get some songs you've already heard. 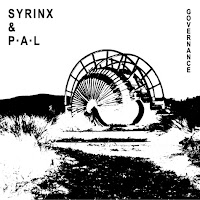 Getting a little burned out on ambient music? Can't deal with anymore atmospheric synth jams? Well Syrinx & P·A·L· have just what the doctor ordered. Governance merges mellow guitar drones, mechanized noises, and ghostly, synthetic vocal loops to create an ominous industrial ambient sound. It's unsettling and engaging, the sort of thing that raises those hairs on the back of your neck. Need I say more? Go snag a copy.

Dark Meadow Recordings
Posted by Geräuschkrieg! at 3:27 PM No comments: 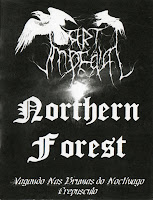 Ever since hearing Art Imperial's Look at the Moon... a few posts back, I've been dying for them to release some more stuff. So, when I saw they were doing a split with Brazil's prolific Northern Forest, you know I had to snag a copy. I was hoping for more of the progressive, ambient black metal that was on the demo, but instead Art Imperial has gone full out ambient. Now, don't get me wrong, it's good stuff with a spacy vibe, it's just that I really dug their earlier sound. Northern Forest's half of the split consists of a short ambient piece with twangly electronic organs, a massive 16 minute atmospheric track that incorporates some nature field recordings, and finally a 10+ minute track that starts out black metal and fades into melodic sounds. Although the Art Imperial half wasn't what I was expecting, this still a still a solid album worth checking out. 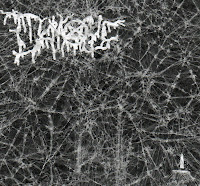 Here's the thing about the whole raw, blackened noise sub-genre, even though it is dissonant and chaotic, you still have to some musical talent to pull it off. Most of the groups involved in this scene are just making a racket and trying to pass it off as kvlt noise. This is why I'm digging Darkosis so much, because while incredibly disharmonic and harsh, you can tell there's skill in the maniacs behind the instruments. Honestly, this won't be appreciated by many, probably not even by a large amount of black metal fans. But, for those who do enjoy this particular sound, Darkosis will be greeted with hails.

Gross Bite is one of those acts where it's tough to provide a concise explanation of their sound and tempting to just pigeonhole them under the banner of experimental. The unifying element throughout Yod is the percussion. Mostly it's vaguely ethnic, world-music sounding drumming that guides pulsating synths, found sounds, and rumbling noises to create an impressive field of sound. Eclectic, interesting, and recommended.

Köhn – Stay Away From The Towers c90

No joke, this might be the electronic prog burner to end all 'em all. So, get this kids, this tape consists of two side long, live synth jams. That's right: no studio magic or edits or anything else. And it's so fucking incredible that if it didn't say it was a live recording, you wouldn't believe it. The synth action just drips kraut psych vibes and the sound is constant morphing and expanding. It's awesome and nothing I manage to bang out about it will do Stay Away From The Towers justice. Absolutely a must have.

Yowza, I could probably spend the entire entire post just reviewing this massive release. Consisting of four cds which contain 36 songs from 36 projects, Dark Meadow has really out done themselves here. As the title of the cd suggests there's a Christmas or winter theme to most of songs here. Anyhow...

Disk 1: The stand out tracks from the first cd came from i AM esper, Ars Sonor, and 3Music. i AM esper's track seems to mark a stylistic shift, as it's noticeably harsher than his other works I've heard. It's still guitar driven, hypnotic drone, but with a dose of mechanical reverb. I'm not particularly a fan of this style, so the fact that I'm digging it speaks volumes for the track. The cold, wind-swept ambient piece from Ars Sonor is like the soundtrack to being abandoned on the tundra and makes me want to check out more from this artist. Finally, 3Music composes an unusual experimental piece that mixes piano, rhythmic samples, and field recordings. Now, as for the groups I found interesting, but not quite my deal, there's Senon & 21 Grams, who remind me of an industrial version of Type O Negative, Blood, with a weird, slow drum n' bass with pitchshifted vocals things, and the minimalist electronic sounds of Murmurists. There also harsh drone tracks from Elizabeth Veldon, Nuclear Nation, and Mists of Poveglia, but, as I said, I'm not really a fan of this sound and these acts paled in comparison to the esper track.

Disk 2: The 2nd cd kicks off with a dark, grimy slab of minimalist drone from Misantronics. Yea, buddy. Ian Holloway follows with a rad little track composed of sampled and spliced church bells. Dark Isle is up next with a track of laid back, low key beats; not really my scene, but I found myself nodding along to it. Then there's a plodding, go-no-where, lounge-y, jazz track from Jared C Balogh, which was one of the two tracks on this cd that I just couldn't get into. Luckily, that buzz kill is followed by an epic lute driven, medieval piece by My Silent Wake that reminded me of Basil Poledouris' soundtrack for the original Conan The Barbarian. After that Abysmal Dirge leaves you feeling more frozen than Hoth with an ambient track of coldwave synths. Next is the other track I couldn't get into, from After [Life]. It's that terrible style of techno filled with shitty space ship noises over the same repeating beat. The cd concludes on a high note, with some mechanized drone from Syrinx and a track of shoegaze with electronic percussion from Nathan Watson.

Disk 3: This one was probably my least favorite of the four cds. Things start off great with a sick selection of metal; there's digital noisecore from Word or Object?, some interesting raw black metal from Lykankult, and death grind from AngelFuck. Unfortunately, these tracks are promptly followed by some jangly dubstep from Alexthymia. It picks up a little with the contemporary, piano fueled piece from Life's Decay and a mesmerizing soundscape from B. Lone Engines, but a track of pointless rumbling from Dao De Noize quickly harshes the sonic vibes. Then there's Noise Injury with annoying, static-y beats and finally Grim Funeral Techno, who's music sounds just as stupid as the name would suggest.

In conclusion, why haven't you scored a copy of this yet? Lonely Christmas is fucking outstanding. Between the diversity of music on here and the insanely low price, there's no excuse you can come up with for not getting a copy. DO IT!

Dark Meadow Recordings
Posted by Geräuschkrieg! at 6:22 PM No comments: