Daniel Menche – Like a Ghost Singing To You c40

Now this is what I envision when I hear people use the term “harsh ambient”. Created by digitally manipulating the first vocal recording ever made, 10 seconds worth of sound from over 150 years ago, Daniel Menche has crafted two tracks of densely textured, glitchy soundscapes. It's slightly chaotic and very low-key; think the wind moaning as it blows through the chard remnants of civilization. It cost a pretty penny to get Like a Ghost Singing To You shipped over from Greece, but it was well worth it.

A single track of stripped-down, funeral doom, I suspect some aficionados of this genre may be turned off by Láppide's sound. Why? Well, it's slow and dirgeful enough, but where are the stereotypical melodic keyboards and trademark monkish chanting? Meu Volho Caixão is all about despair, suicide, and that distorted electric guitar. I liked this for a demo, but I want to see Láppide grow from here. Anyhow, turn this up and remember to coil that noose of yours around 13 times.

Make Believe Bombs kicks things off with a side long track of acid kraut rock that fades out into deep space synth before jumping into a little bit of aggressive post-rock which then drifts into shimmering, atmospheric glory. Niiiiice....Now hand me that bong, dude. On the flip is Color Rabbit with eight tracks of psychedelic electronics and looped found sounds. It's kinda far out and I'm digging it. Usually when I review splits, I like to select one band as the winner, but this one will have to be a tie. Check it out. 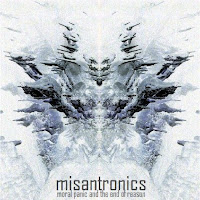 Misantronics – moral panic and the end of reason cd-r

Layering harsh, rhythmic soundscapes over electronic percussion, Misantronics is pumping out some menacing stuff on moral panic and the end of reason. There was a track or two where the beats got a little too drum-n-base for my taste, or where an unnecessary keyboard popped up, but it wasn't a big issue. On the whole I dug what I heard, especially the massive 13+ minute burners that bookend the album.

For those unaware, the artist formally known as Orphan is now ORPHAN ‌ Oliver and will, allegedly, finally become Oliver. The significance of this name evolution? Iunno...I'm no psychologist, I'm just in this for the tunes. And, said tunes are magnificent. With eight tracks of dreamy, melancholy music infused with distant, echoing vocals, ambling keyboards, and sparse percussion, three times away makes you want to close your eyes and drift off into that grey nothingness. Highly recommended. 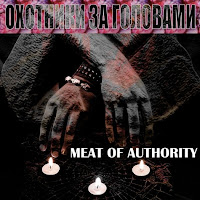 Rarely does a musical act come along that manages to leave me feeling befuddled, but Охотники за Головами has done just that. If I were to try and pigeon hole the sound on Meat of Authority, I'd say 'post-industrial', but that label sounds really dumb and is a gross oversimplification of what's going on here. The backbone of Охотники за Головами's sound is 90's industrial rock, but there are healthy doses of electronic experimentation, classical, and ambient sounds blended in. Usually when groups try this sort of thing, it results in an audio clusterfuck (see Demetrius Grave), but here the music is surprisingly well played and both the songs & album have a solid sense of cohesiveness. While not a genre of music I'm particularly into, I'll wager fans of industrial music will eat this up. If this is your scene, better get get a copy 'cause Meat of Authority is a limited release.

Scumbag Summer #4: The Sound of Sadness Silence is Golden

Slick little art and poetry zine here from Germany. Seeing as I nein sprechen Deutsch, I cant tell you anything about the poetry. What I can tell you about is the art, which is a collection of mixed media collage pieces and drawings. As the title of this issue of Scumbag Summer suggests, there's an element of isolation and gloom about the works. Worth checking out if you dig art zines or can read stuff in kraut. 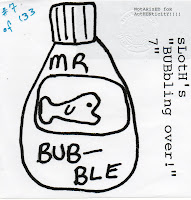 Venturing off into garage-y noise rock, no-wave territory, sLoth serves up two tracks of audio dissonance. While I'm digging what I hear, you've got to remember I spent large sections of my youth going deaf to the likes of godheadSilo and Happy Flowers, so this isn't for everyone.

Self released
Posted by Geräuschkrieg! at 12:29 PM