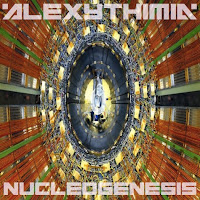 Somewhere in the dusty, forgotten recesses of my record collection is a copy of the Chemical Brothers' Dig Your Own Hole, which was as into techno as I ever managed to get. So, I'm probably the last person qualified to be reviewing this, but I'll give it a shot. Alexythimia apparently plays a mixture of breakbeat, a sub-genre of hardcore drum and bass, and neoclassical, which I'm pretty sure is an oxymoron like 'jumbo shrimp'. That seems like a unique sound and it had my curiosity peaked. I was actually surprised at how much more pronounced the neoclassical elements were on Nucleogenesis then the drum and bass aspects. Interesting stuff, but it hasn't swayed me over to techno. I suspect this will be appreciated by those fans who want electronica that's more than just beats for dropping ketamine to.

A collaborative piece, Halftone Mud, has the rad distinction of each tape containing a unique selection tracks. Hows that work? A wizard did it. The side-long tracks on my tape will only be heard by 15 others who buy a copy and those people's tapes will only contain one or the other of the songs. You dig? Anyhow, the first side is filled with mechanical rumblings and pulse waves from deep space. On the flip things get all harsh and noisy. Cool music, cool concept. 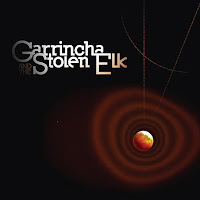 Since discovering a while back that Garrincha & The Stolen Elk would be putting out a full length, I've been eagerly awaiting it's release, which has only intensified my frustration upon finally hearing Void. Now, here's the thing; this is not a bad album, by any means, but when stacked up against their two earlier releases, it seem lacking. With each release G&TSE has changed up their sound and Void is no exception. It's five tracks of dark, ritualistic industrial ambiance; a mechanized incantation constructed from slowed down samples, moaning synths, and electric guitars. It is a good album, but I've heard these guys do better. I'd recommend new listeners start with Void and work their way backwards to We Are Wyoming and Black Sambo/White Mambo. As critical of it as I am, I'd still encourage you to check out a copy. 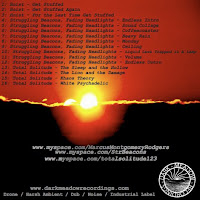 What are the odds I'd get two techno albums to review in one post? Anyhow, first is Hoist with a lot of jangly beats, arbitrary sounds, and the same Kermit the Frog sample over and over again. Seriously, three songs with snippets of “Being Green” in them. Next up are numerous short tracks of disjointed beats from Struggling Beacons, Fading Light. Finally, there's Total Solitude with a few tracks of indie electronica stuff. The Total Solitude stuff was listenable, but everything else? Pass. 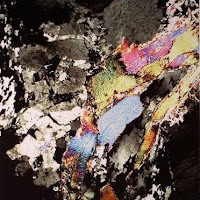 Niiiiiiice. This ep kicks off with a slab of relaxed psychedelic stuff; music for the ethereal plane. On the B we get a change up with a spacy track composed of electronic percussion, synth, and distant vocals. It's the soundtrack to a casual joyride around Phobos. This is one of those releases where no matter what stupid shit I type, it wont do the music justice. Check it out.

This split tape starts off with a spacy track of instrumental post-rock from Make Believe Bombs. The sound is just a little gritty and the synth is wailing away; killer stuff. Ailes Of Few follows on their side with a track of improv experimental music created from a variety of instruments and random items. Honestly, it's a really uninspired track and it sounds especially meh following MBB's track. 50/50.

Having never heard of either of the musicians, I snagged a copy of this tape on a whim, and I'm quite glad I did. Of Deathly Premonitions is four tracks of superb Appalachian guitar. I know, you see something described as “Appalachian” and the first thing that pops into your head is some stupid hipster with an ironic handlebar mustache fucking around on a banjo. Not here. What you get is densely layered, intricate folk music from two skilled guitarists. The songs tend to meander, but in a good way, and by the end of each track you've become lost in the music. A must have.