Carter Mullin kicks things off with a single track of laid back guitar sounds. Real nice and mellow, the kind of thing that you wanna just doze off too. On the flip, found sounds and electronics are woven together by Calypso Borealis to create bleak and forlorn songs. Makes you feel like you're all alone, on vast, windswept saltflat.

Garrincha & The Stolen Elk – We Were Wyoming c20

Venturing away from their drone oriented sound on Black Sambo/White Mamba, Garrincha & The Stolen Elk have gone head first into avant-garde jazz and noise rock territory. No wave, maybe? Fuck labeling it, this is some wild stuff. While I think I enjoyed the sound on their first release a little more, I'm still loving what's on here. I'd tell you to go snag a copy, but I'm fairly certain it's long sold out. Sucks to be you.

Don't be fooled into thinking that eastern Europe has a monopoly on terribly recorded, one man, black metal outfits. Lurking among the moonshine stills and dilapidated barns of Kentucky is the lofi grimness of Highmass. Connoisseurs of this style will laud Ecnaegnev; it's raw, evil, and filled with the ubiquitous tape hiss associated with black metal projects that record demos in their parent's basement. I really wasn't too keen on this initially, but it's grown on me some the more I've listened too it. 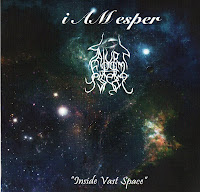 i AM esper/Saturn From Essence – Inside Vast Space cd-r

Space is the place, and both these bands are here to make sure you know that. i AM esper starts things off with two tracks of guitar driven ambient; the first drenches you with rays of cosmic goodness, while the second leaves a sense of foreboding. Saturn From Essence rounds things out with a creepy synthed out solar soundscape. Ignore the Prime Directive and do whatever it takes to snag a copy.

I was ready to chuck this demo about 30 seconds into the first track. Terrifying lofi thrash with the drums programmed on a shitty Yamaha keyboard. For whatever reason I decided to keep listening and the following track was a sleek, pro sounding chunk of slow, death metal infused thrash. Ok, didn't see that coming. This is followed by three more tracks of blackened thrash. Seems like Old Razor really hits their stride with these last tracks; really grimy, rough sounding thrash. I can't really recommend this demo cause it's all over the place in just five tracks and because that first track is a musical abortion, but I'm interested to hear what Old Razor pumps out in the future. 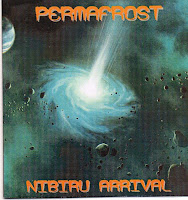 From the infinite, cold depths of space comes Permafrost with three tracks of menacing ambient music. There's a whole doomsday, ancient astronaut vibe flowing throughout the ep that makes it spooky as fuck . Rad stuff. 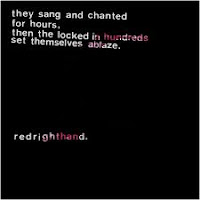 redrighthand – they sang and chanted for hours, then the locked in hundreds set themselves ablaze cd

This is going to crush you. I don't care how 'into' sludge you are, or how many Crowbar and Buzzov*en albums you have gathering dust on the cd wrack; you're not going to be prepared for how monstrous redrighthand is. Finally released after being recorded the better part of a decade ago, this has stood the test of time and then some. In an age of dudes in v-neck shirts claiming Mastodon is sludge, this is sorely needed.

At War With False Noise

This sounds like the sort of music you'd hear drifting from the hut of Sheelba of the Eyeless Face. Intricately arranged soundscapes with drone sensibilities, White Out is enticing and mysterious. You know you need a copy.

A benefit compilation for Japan consisting of 13 electronic musicians, there's a little something here for everyone. Most of the stuff falls into the nebulous genre of 'experimental music', but there's also some noise, glitch, and ambient. My particular favorites are the harsh dronescape of The North Sea, the piano driven, glitched out idm of Rene Hell, and the spacey beats of Panabrite. Good music for a good cause.

Draft Records
Posted by Geräuschkrieg! at 10:54 AM