A demo from a Russian one-man black metal project that doesn't sound like it was recorded in a cave with a broken walkman? Shocking. Enjoyable enough stuff here; with a little more synth action than you'd expect, but not in a bad way. I can only hope Satan has been placated with Binan Ath's offering of corpsepaint and songs containing “goat” in the title. 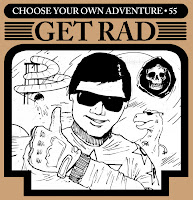 Get Rad – Choose Your Own Adventure 7'

I'm not to big into hardcore, but I'm digging Get Rad. They manage to cover that essential trifecta for this type of music; keeping it short, fast, and full of nostalgia for the pop culture of the late 80's & early 90's. Get ready for that circle pit. Oh, and yes there is a sweet choose your own adventure included with the ep.

Fuck yea! This is some nonstop, thrashed out, horror filled rock and roll. Loud, gritty, and mean as a snake, Kentucky Suicide is the sound track to you and the Wolfman splitting a bottle of rye & driving around in a bitchin '73 Camero, looking for trouble. So, get it already. 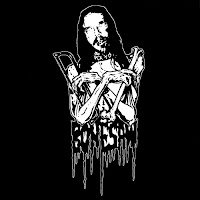 Uhhh, so each of these bands recorded a song for this ep about how much they like to hang out with eachother... First up is Norway's Lobotomized, who start off with a punk infused death metal track about the good times had while touring Scotland with Bonesaw. *yawn* This is followed with an Abscess cover that actually sounds alright. On the other side is Scotland's Bonesaw with an old school sounding death metal track about, you guessed it, hanging out in Norway with Lobotomized. These bands seem to love one another so much, you'd think they'd just get a civil union already.

At War With False Noise

Taken from a live performance last year, Season Above Lakes begins with a claustrophobic piece composed of bells, pipes, and a howling synthesizer. It's a louder and more chaotic sound than what I associate with Pine Smoke Lodge. On the flip side is a more ethereal track of a droning synth accompanied by vocalizations, an oriental flute, and various percussive instruments. Season Above Lakes is an enjoyable enough listen, but a little rough around the edges. 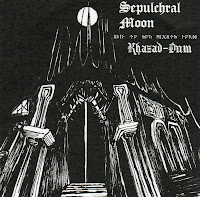 And what do we have here? Things start off with a nonrhythmic percussion piece played on what sounds like a diy kick drum, a pie tin, and a single bar of a xylophone. This followed by several tracks of nearly inaudible natural soundscapes composed of wind and rain. A not-so-spooky synth piece also pops up along the way. As if this wasn't enough, most of these tracks contain chunks of dead air. Basically, Khazad-Dum breaks down like this:

Smell The Stench
Posted by Geräuschkrieg! at 2:28 PM