A live recording consisting of a malfunctioning synthesizer, tape noise, and what I assume is someone dragging around heavy furniture (there are a lot of *thuds* and scraping noises), Tomorrow Will be Worse is a colossal yawn inducer. I get the feeling that 1%er consists of arty types who would just argue that I can't appreciate their creation and entirely missed the “metamorphosis of sound” on the album. Nah, I got it dudes; it started off with a bunch of blip sounds and ended with rumbling noises. Freakin' sonic wizards, right here... 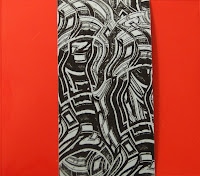 I can't tell you how long I've been waiting for Black Velvet Stereo to release a full length album. BVS has quickly risen to be one of my favorite groups and Destroy This Town does not disappoint. The dark, harsher drones of Iron Trees are not as prevalent here, with most of the tracks being crisp ambient waves that evolved out of Metal Rain Machine. It's incredible. There's a massive sci-fi vibe throughout the album, like it's the soundtrack to a Philip K. Dick novel. Unfortunately physical copies of this were limited to some ridiculously small number like 15 or 20, but luckily for you Black Velvet Stereo has made the album available digitally on it's bandcamp. This is a must have.

A Beard of Snails 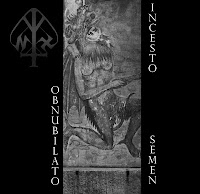 Damn, Obnubilato Incesto Semen is going to plow into you like a bulldozer. Playing fast, thrashy black metal, I'm digging what Nyx has to offer. Surprisingly, they incorporate the occasional melodic breakdown in a song or two, but it actually works really well, adding some complexity to their sound. The skilled level of musicianship and good production makes this feel like a professional label album rather then a demo release. Keep an eye out for these guys, I have a feeling they're gonna be making a name for themselves real fast. 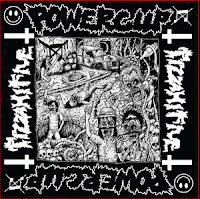 Fuck yeeeees! First up is Pizza Hi-Five who rip through 12 tracks of blistering grindcore. I wont play the “reminded me a little Agathocles” card, but there's definitely some mincecore influence in there. I'm diggin everything about Pizza Hi-Five, right down to the song that has goofball hand clap solos. On the flip is Powercup, who is apparently all about power tools, home improvement, and contractors. Yea, like all 13 of their songs mention those topics. Their sound is a little more simplistic, straight forward style of grind, but it's just as fast and sick. You like grind? Then why haven't you snagged a copy of this already?

Hurts To Hear
Posted by Geräuschkrieg! at 1:30 PM