The Hare and The Moon – The Grey Malkin c41

I'm not particularly well versed in folk music and what's in my record collection is all stuff from this side of the Atlantic. So, I had a little trepidation about snagging a copy of The Grey Malkin, unsure as to how much I'd like contemporary British folk. It turns out that fear was completely unfounded; The Hare and The Moon is fucking incredible. Dark, doomy, and vaguely psychedelic, I'm loving everything about this album. The ghostly female vocals are the icing on the cake, creating a completely forlorn and haunting ambiance. This is one of those releases that no amount of my babbling will do it justice, you've got to hear it for yourself. Highly recommended. 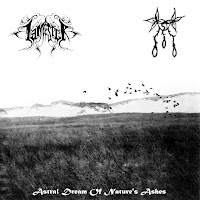 You get used to split albums having each artist's tracks grouped by themselves, so to hear them juxtaposed like they are on Astral Dream of Nature's Ashes shakes you up a bit. Add to this i AM esper is guitar driven drone, while Synkretismos Mutare crafts bass & beat heavy soundscapes and you've got the recipe for some interesting sonic interplay. Top notch drone from two impressive acts, presented in a way that keeps you on your toes...Why haven't you snagged a copy yet? 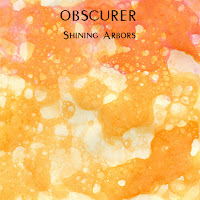 So, I can't really decide if I'm on board or not with Obscurer. A single track that is broken down into three movements, Shining Arbors is a strange beast. Wailing theremins, undulating electronics, distant guitars, and spectral vocalizations mingle together to create an album in a constant state of flux. Where Obscurer is going, who knows? You're just along for the ride. There's no way to just passively listen to this, as it demands your undivided attention. Like I said, I'm not sure about Shining Arbors, but if you like things a little more unusual, it'll be right up your alley.

Playing “black n' roll,” Occult Vomit is raw, blackened thrash style stuff, with the addition of southern fried, 70's rock guitar riffs and a lot of that buzzsaw bass sound. I'm honestly less than impressed with Anti-Human Devotion, but maybe I'm just not kvlt enough. It's not terrible or anything, but the album starts to drag and the songs begin to sound interchangeable with one another. It is what it is, and if you're a fanatic for thrash-y black metal, you'll dig it. 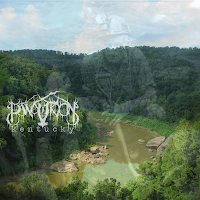 Wait...Appalachian black metal? Yeap, thou it's not quite what you might be expecting. Kentucky is split pretty evenly between tracks of atmospheric black metal and bluegrass. So, if you were hoping for banjos and fiddles in your black metal, you're out of luck. About as folksy as the black metal stuff gets is the inclusion of some flute action. I actually found myself liking bluegrass songs the best, though the black metal tracks were highly enjoyable as well. Honestly, this isn't an album for everybody. In fact, I suspect many people will actively dislike it, but whatever, I can't get enough of it.

This little split kicks off with a sidelong burner of mechanized drone and rhythmic pulsations from Twin Polygamists. It's dark and menacing with kind of a space-y feel, like the soundtrack to exploring a mysteriously abandoned spaceship adrift in the Kuiper belt. On the flip Pacific Mausoleum lets loose with a track of soft, rumbling electronics that suddenly morphs into low frequency squeals. Not bad, but it doesn't really stack up against the Twin Polygamists track.

A Beard of Snails
Posted by Geräuschkrieg! at 10:26 AM