Collapsed Arc is at it again, this time with two side long slabs of glitchy looped audio. In Cursive is dense and claustrophobic, possessing a disjointing non-percussive rhythm. It's rad as hell, some of the better experimental music I've heard in a while.

The first demo from Brazil's Conspiracy 666, you get two tracks of black metal with a technical edge. There is a surprisingly pro vibe to this; both tracks are composed & played with skill and the production is crystal clear. Nice to hear a black metal band recording in a studio instead of their parent's basement. Worth checking out if your preference in black metal runs toward skill rather than rawness.

Holy fuck! Go get a copy of this right now. No Justice, Just Law is 20 songs in under 20 minutes of Cop Bar's grind/hardcore insanity. There's a great balance of being heavy, but not too serious. I can't wait till these guys drop their split 7' with Captain 3 Leg next year. Seriously, go get this already. 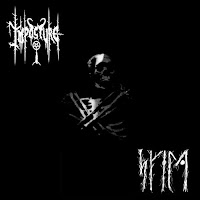 France's Impostüre kick things off with two tracks of blackened death metal that's got a certain rock-n-roll vibe to it. I'm digging it. And, the vocals are ridiculously guttural; they sound like something from some scummy goregrind act, but it ends up working great here. America's Skeld wrap the album up with three tracks of cacophonous black metal. It was a little too loud and abrasive for my tastes. Check it out for the Impostüre half, and who knows, maybe you'll dig Skeld too.

A single track ep from the ambient side project of Count Shannäth, the majority of Metos is constructed from interwoven nature field recordings and meandering keyboards. Pretty standard fare, until you get to the sudden appearance of the feedback laden guitar or cheesy, digital lute solo. All in all, a fairly mediocre release. Pass.

Laura Warholic – what comes before the word?? c26

The majority of this tape is nearly inaudible. I donno if I just got a fucked up dub or it's supposed to sound that low, but it left me nonplussed. The A starts off with a whining electronic piece that goes nowhere, then there's a folksy-shoegaze track, followed by a spoken piece over a sound collage, and things get rounded off with a fuzzed out, wah-wah guitar jam. I'd be digging those last three tracks if I could actually hear them without having to turn the volume up to 11. Flip the tape and there's this dark, rambling, sci-fi spoken piece that's layered over really driving percussion and synth. It's rad as hell, even with the fucked sound. The rest of the tape is taken up with a ghostly, ethereal track. It's a cool piece, but feels a little anticlimactic following such a burner. I really hope it's just my copy that's messed up and not all of them sound like this, because there's some awesome music on here and I want to tell you to snag a copy.

Faux Pas Records
Posted by Geräuschkrieg! at 7:45 AM