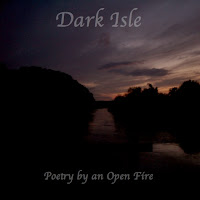 Collecting two eps and some unreleased work, Poetry By An Open Fire is 25 tracks of experimentation with electronic beats, neoclassical keyboards, and ambient soundscapes. With as many tracks as there are on the album, there's a fair amount of variance in Dark Isle's work. Some of the pieces were basic triphop stuff, while others were interesting, genre blending tunes. While this isn't really a style of music I'm into, I found myself enjoying the album. This will be appreciated for those who enjoy more progressive ambient or dub.

Grasshopper – Miles In The Sky c20

I've been digging the Grasshopper cassette I reviewed a few posts back so much that when I saw this limited, tour only release was reissued, I had to snag a copy. The boys kick things off with a side long track that starts as really harsh drone and ends with trumpets and electronic ambiance. The B side is more trumpet drones and synth pulsations, but a little more laid back. Cool stuff.

I get the feeling that End of Humanity is a collection of Permafrost's odds and ends packaged together. The five dark ambient tracks stand well enough on their own, but when listened to as a whole, they lack a sense of cohesiveness. The two songs which are continuations from other songs on other albums particularly stand out, as the atmosphere they create is noticeably different from this album's other tracks. It's not a bad album, but the inability of the songs to mesh and create a shared ambiance is frustrating.

You can't get any more rad than this right here. Playing something akin to 'sludge gaze', SSSTORMSHELTERRRR manages to churn out a heavy, dreamy, doom-pop sound. You only get three tracks, but it'll keep you till they release a full length. Soooooo recommended.

These Feathers Have Plumes – all cats are grey by night c22

Composing bass driven drone that's skillfully interwoven with field recordings, These Feathers Have Plumes has a mysterious and elusive sound. With each listening of all cats are grey by night, something new presents itself and you're absorbed deeper into the music. This is an essential addition to the collection of any serious drone aficionado.