Abrasive and disjointed, Make Us Proud reminds me a lot of the noise rock AmpRep was pumping out some 20 years ago. But, you can't pigeonhole Bad Creeps' sound down to just that. There's a little bit of a powerviloence undertone and a totally snarky feel to it all. It's fucking rad. My only complaint is that mix seems a little muted, especially on the vocals. I'd have liked to hear those shrieks and barks louder. It's not that big a deal. What is a big deal is that this is limited to 50 copies, so you better keep your fingers crossed there is one or two still left for you.

Remember back in high school when one of your pals dropped blotters for the first time and was all “Dude...The colors, I can hear them!” Well, now you too can finally hear that chromesthesiatic trip, thanks to Mt. Tjhris and this tape. It's a prismatic spray in the audio spectrum, the sound of light refracting through a million crystals. I won't lie, Amethyst Cave's whole new age, purple crystal healing sounds vibe is way too Hearts of Space for me, but the actual music is solid. Bubbly, synth ambiance, with some trance-y drone tossed in for good measure. Recommended, especially for all you clairvoyants who want a soundtrack to your crystal gazing. 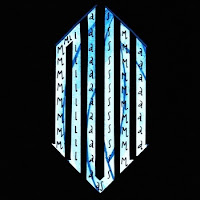 All to frequently “post-black metal” is code for hipster dicks playing at some bullshit, ironic, art school, quasi-black metal sound. Thankfully, this is not the case with null. Consisting of 4 massive tracks blending vaguely melodic black metal and guitar fueled dronescapes, Miasma is totally overwhelming. I can see a lot of black metal purists being turned off by this, but fuck them, it's their loss. Required listening for anyone who enjoys progressive and creative black metal type stuff. The only unfortunate aspect about Miasma is that it marks the end of null. Oh well, better to go out with a bang, right?

Make sure the Pabst is ice cold and that sweet wizard-shaped bong is packed, 'cause it's time to pop this monster into the tape deck. Totally pummeling, crushing sludge spaced out over two 45 minute cassettes, how the fuck could you not love Slaw? The production is surprising clean for music that sounds so grimy, but it works. These dudes have a kind of minimalistic sound going; no psychedelic guitar solos or southern rock action, it's just a pulverizing wave of sludge. Why the fuck are you still reading my ramblings and not out snagging a copy?

Ok, so this is a totally rad idea. Put together a huge comp that consists entirely of two-man bands. Duets is 16 bands and over an hour and a half of tunes. Mostly synth and electronic action from the groups, but there's some other styles thrown in as well. All fairly solid tracks, standouts for me were the rumbler from Brother Raven, the meditative guitar drones from Century Planet, and a plodding rock instrumental from Big Sky. And that's just the A side; on the flip there solid tracks from Blood on Tape, Sundrips, & Grasshopper. Diggin it.