copynoisehighclassical is a mysterious act that fills out the A side of this tape with a single track of metered analog glitch. It varies from mildly listenable to extremely annoying. The main problem is their use of a simplistic & highly repetitive “click” percussion. On the flip side is Songs About Pandas with numerous short noise, ambient, noiserock, and experimental pieces that feature looped guitars. Most of it was enjoyable enough, but the brief length and constant genre hopping doesn't really let you get a feel for the songs. Even when SAP is at their best, it can't compensate for cnhc.

After being blown away by Family Treasures' Alter of Ashes, I was stoked to get the recent split with Hunted Creatures. Unfortunately, Family Treasures ventures off into harsher territory on this release. It reminded me of Daniel Menche's old stuff, but with more synthesizers. It's not that it's bad sound, just not what I'm digging these days. Hunted Creatures do some atmospheric stuff consisting of electronics and samples spliced together. Maybe it's the percussion, but there's a certain quiet, frenzied feel underlying their work. It's a solid release, just not a sound I'm into at the moment. I'm gonna shelve this for a while and comeback to it later, as my audio palate shifts accordingly.

You are not ready for the epicness that is contained on this tape. Imagine smoking rocks of frozen ammonia on the surface of Ganymede. YEA. You worry that when synth stuff gets spacey it's gonna go all new age on you, but not here. It must be heard to be believed...So, you know, go get it. 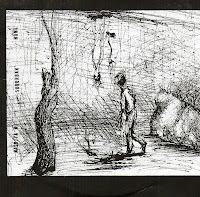 We've got an interesting little split here with a single track from two unusual Italian bands. Up first is Suburban Howl, who play something in between lo-fi folk and free jazz on homemade instruments. It gets a little twangly in certain parts, like the solos of randomly scratched, grated, and plucked strings, but generally an enjoyable piece. Nascita-ri follows up with a track of black ambient metal sounding stuff. Very minimalistic and very oppressive, my favorite of the two bands. This is an enjoyable release, but not meant for everyone; you're going to need more than a casual appreciation for experimental music to really savor what these two bands are playing. 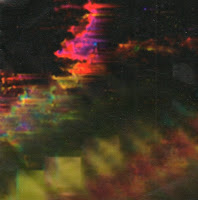 A single track of rhythmic drone, there is something very sinister and unsettling about Deep Cloth. It's the soundtrack to exploring an abandoned chemical refinery where all the machinery is still running; an entirely disconcerting experience. Not the kind of foreboding sound I'd expected from a band with a name like “Sunglasses”. Definitely something you should check out.

Cryptic Carousel Records
Posted by Geräuschkrieg! at 11:05 AM