Layering oscillating electronic patterns over deep-sea drone, Black Unicorn has fucking outdone itself. The musical narrative of a battle between two oceanic collosi; I was initially expecting some hokey, dramatic synth bullshit. What I got completely blew me away. A masterfully crafted and theatrical composition, Squid vs Whale is required listening. Fuckin' go get it.

Since reviewing it in the previous update, Ettinger's The Lion of Judah 7' has seen some pretty heavy rotation on my phonograph. Digging it as much as I have been, I had to snag a copy of his other new release, Patter Recursion. Composed entirely of square wave forms, his sound has migrated from tweaked no-wave into the realm of analog machine music. It's precisely arranged, minimalistic soundscapes for a mechanical future. Geometric perfection. 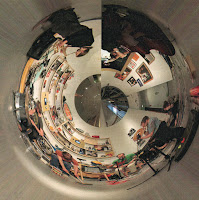 So, this claims to be from a group of Finnish musicians upholding the “Komutian shamanic musical tradition”. I say 'claims' because I couldn't find anything on teh intertubs confirming the existence of said Finno-Ugric peoples or their homeland "Komutia". So much for that stereotype of the Finnish being truthful and straight talkers...The only Finn you can trust is Huckleberry. As for the music? Well, it's an interesting blend of free jazz and world music. The inclusion of saxophones and throat-singing seem to also dispute the claim of a traditional Finno-Ugric sound. It'd cool stuff, but it's not for everyone. Also the album came with a random, cd-sized crochet piece; which I guess you could use as a coaster for your glass of sahti? Check it out.

A collection of sound collages from reappropriated audio, you can basically sum Pangea up as a lot of hissing and rumbling with a tune or voice you'll occasionally recognize. Twenty years ago, you might have been able to pass something like this off as an impressive, avantgarde soundscapes, but now? Total yawn fest.

What are the odds that I'd review two Finnish bands in the same update, let alone two Finnish improve acts? While Kheta Hotem has a free-jazz, world music vibe going, WYZ cranks out psychedelic, folk rock weirdness. Each of these side-long tracks starts very mellow and slow, the sort of thing that lulls you into a hypnotic state. Gradually, the tempo, intensity, and complexity of the music increases, culminating in some seriously heavy tunes. It's rad stuff, but, unfortunately, WYZ is a one time collaboration, so this is all she wrote. If you're in the market for something unusual, snag this up while you can.

Bum Tapes
Posted by Geräuschkrieg! at 8:49 AM